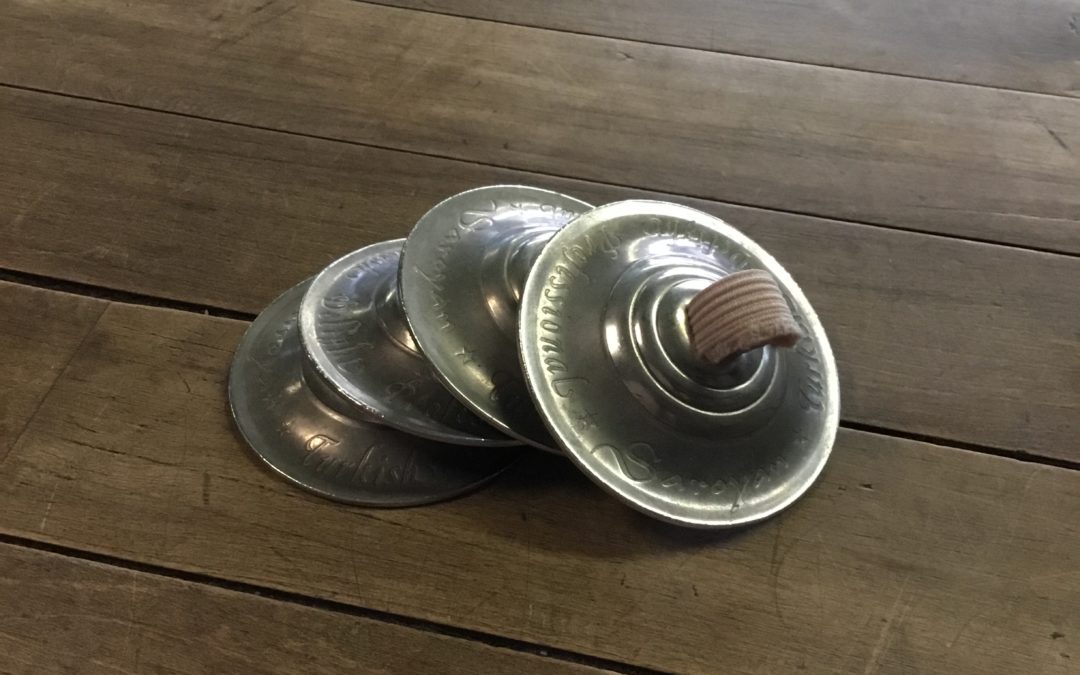 One of the most most intimidating aspects for some students studying Middle Eastern Dance (or Belly Dance) is learning to play the zills, or finger cymbals. Although no one can forcibly make a person learn the skill, and different styles of Middle Eastern Dance vary greatly in the amount of importance zills play in them, it is safe to say that no dancer can be considered to be above the low intermediate level unless they have proficiency playing them. Finger Cymbals are also part of many people’s idea of what Middle Eastern Dance is, and for some audiences, their absence is a disappointment.

While from a training stand point it may be best to begin learning to play as soon as possible after beginning lessons, this is frequently too much of a commitment for the rank beginner; they often have enough on their plate. Some people have no interest in finger cymbals and others just plain dislike them. Many folks come to Oriental Dance with no previous movement or exercise background, body-image issues, time constraints, misconceptions about the dance, and various other issues that are quite enough to deal with already. When the time is right, however, it’s a good idea to begin learning to play this most approachable instrument.

One good reason is because playing cymbals and dancing is really fun! Your playing doesn’t have to be especially complex or advanced because a little bit of basic skill goes a long way. In the hands of a professional percussionist, of course, cymbals can be extremely versatile and nuanced, but this needn’t be a worry; you don’t have to study for years and become super-advanced to become competent enough to sound good and get a lot of enjoyment out of playing and being part of the music.

But there’s more to it than just having fun, of course. The close relationship between Middle Eastern Dance and Music requires a high degree of musicianship, and getting as early a start on this as possible goes a long way toward reducing anxiety toward learning a—gulp!—musical instrument. Don’t allow yourself to get all wigged out, after all, you probably know more than you think already. Learning to play cymbals helps to develop one’s musical literacy and agility just as learning to dance does, and in fact, there is a great deal of overlap in terms of the concepts, skills, and brain space utilized by the two activities; if you’ve already begun dancing, you’ve got a big head start.

Okay, you say, if this is true, why isn’t some kind of formal music training on an instrument a routine part of other dance styles? Why single out Belly Dancers? Isn’t musical facility part of being a ballet or jazz or tap or any other kind of dancer? Well, yes, you are absolutely correct, it is. What differs is that the relationship to the music that ballet dancers have, for example, is usually dictated by or dependent on a choreographer or teacher, who chooses the music and the steps and the way they want them performed. Any stylistic leeway the dancer may have (usually) occurs within the framework of existing choreography. Of course, this is a very broad generalization, and the artistic process varies enormously between styles, choreographers, and teachers. Some choreographers stick closely to the dynamics of a given piece, some use the music as an atmospheric element, others use a non-metered soundscape, and still others set pieces in silence. All of these choices are valid. And it is true that if two dancers learn the same piece, the more “musical” dancer will stand out.

The Middle Eastern style dancer, by contrast usually IS the choreographer, whether in the immediate sense because they are improvising or because they themselves choreographed a piece on and for themselves; and in all cases the music is always the starting point and central element. The highest overall goal of the Oriental dancer is to actually BE an instrument in the ensemble, one whose instrument manifests itself visually rather than aurally. It is incumbent upon the dancer to respond to and interpret the various rhythmic and melodic aspects of the music and reflect the dynamics and emotions of what s/he hears. There are decisions to be made, a mixture of both personal taste and traditional conventions … “Am I going with the rhythmic or melodic aspects of the music?” “Is the music acoustically dense, or is it a solo instrument?” “What instrument am I hearing, what is its timbre, and how shall I choose to reflect and respond to it this time?” “Do I already know this song, and how is this version different?” etc., etc. If the dancer is improvising, all of these decisions will be largely automatic and far below the level of consciousness. If it’s a choreography, these decisions can be planned out with the luxury of a little more time to work things out, but the process is essentially the same. In any case, the dancer needs to be actively involved in the music, in the immediate sense; even in a set choreography, the dancer may do slightly different things as they hear different aspects of the music, and the piece may evolve over time. One of the highest compliments an Oriental style dancer can hear is that they are musical, dance with real feeling, or something along those lines.

Because Middle Eastern Dance is at its heart a social dance that has only begun to be been formally taught in a class setting recently, finger cymbals are sometimes given short shrift by not being recognized and treated as the musical instruments that they are. They’re thought of in some cases as a prop, an embellishment, or an afterthought to the dance rather than an integral part of it … but nothing could be further from the truth, in my opinion. Why is this so? Maybe it’s because taking actual music lessons is the last thing most people want to do when they sign up for a recreational dance class down at the Y or at their local mom-and-pop dance studio; “music lessons” for some conjure up mean teachers and hours of drudgery sitting at a piano; consequently, the “musical instrument” aspect of finger cymbals is sometimes downplayed by teachers so as not to scare students away. (A very real consideration that instructors face.) Another possibility is that some teachers nowadays consider zills an option rather than a requirement, and never teach them.

In my observation, this is a mistake. While Belly Dance certainly is a living, breathing art form, and fashions do come and go, it would be a terrible shame if finger cymbals were to disappear from the dance. (Fortunately I don’t see this happening any time soon).Even if one doesn’t intend to ever step in front of an audience, the act of learning to play an instrument while moving is well worth the effort in terms of coordination, timing, and deeper cognitive involvement with the dance and the music.

Zills are a unique, distinguishing feature in Belly Dance, setting it apart from other types of dance. Since Middle Eastern Dance is all about the music, and the dancer is part of the music, there is no reason to hesitate to learn how to play finger cymbals. So good luck and happy zilling!